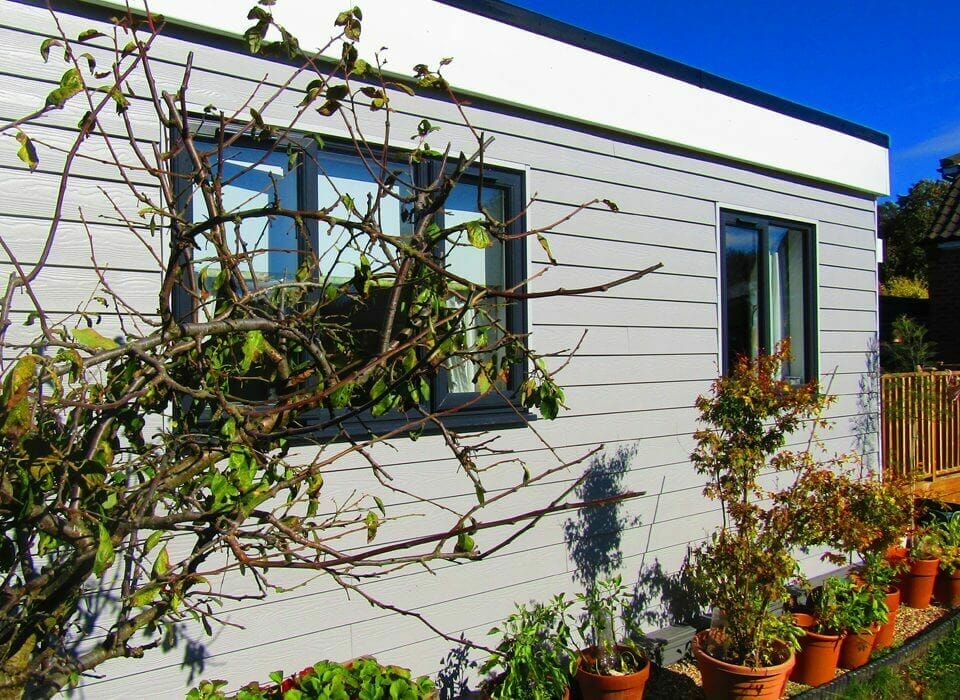 This Bespoke Annexe is clad in light grey Marley cedral weatherboard with a dark grey EPDM Synthetic rubber flat roof. Featuring White UPVc Facias and Anthracite Grey on White windows and doors this bespoke design is a thing of beauty.

You have got your own independence. Yet, you have got that relaxation of mind that there is always someone there if you need them. Which I think is the fear as you get older. 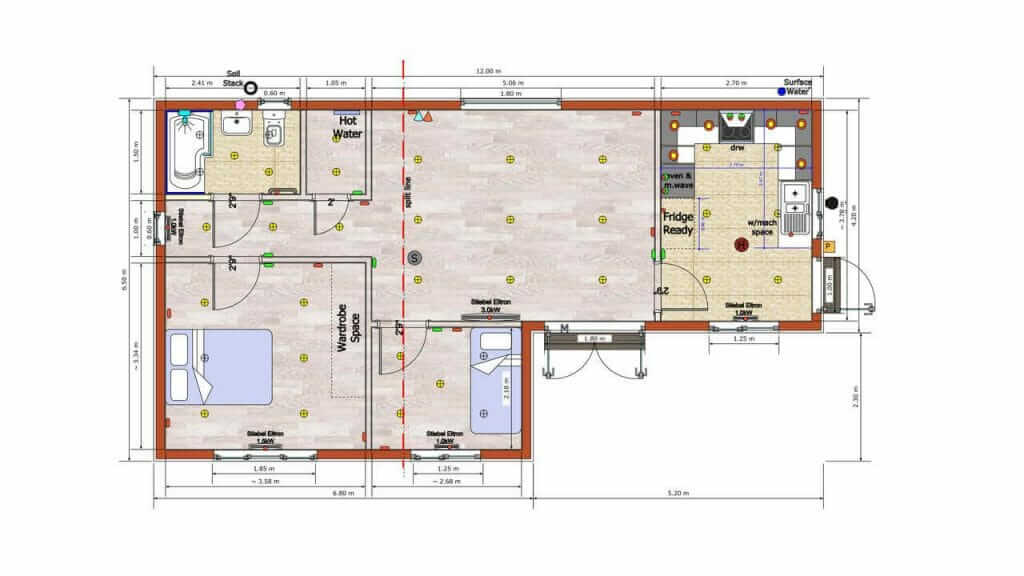 Pauline Keleher is enjoying what daughter, Siobhan says are her twighlight years, relaxing in a brand-new bespoke granny annexe. This is their story.

A Joke Turned into A Dream

Pauline and her husband already owned a bungalow but found the property was getting unmanageable for them – especially the 120ft garden.

“The garden was a struggle, especially”, says Pauline. Its huge and I just couldn’t manage it and my partner has heart problems so he couldn’t either. We initially decided we’d try to move to a smaller bungalow and looked around but couldn’t find anything that didn’t need lots of work.”

Daughter Siobhan says living in the garden initially started as a bit of a joke; “We started joking with Mum about using the garden to build a big swimming pool or getting a caravan for them to live in! Then I started doing a bit of research, found iHUS and the joke became a bit of a plan. We decided that I would move into the bungalow and that we would build an annexe for mum and dad.”

Siobhan and her parents chose iHUS because the family wanted a provider which offered an end to end service; “iHUS appealed right away because they said they could do everything for us. Some of the other companies offering the same products didn’t do an end to end job meaning we would have to install our own kitchen or decorate, and we just didn’t want that hassle.”

Not wanting to waste any time we soon got to work for the Keleher’s and came up with a bespoke, L shaped annexe that fit Pauline’s requirements perfectly.

Mum and Daughter Living Side by Side

Pauline was especially keen on the idea of us coming up with a bespoke design; “A bespoke annexe was ideal as we wanted a layout that would work specifically for us. Being able to articulate exactly what we wanted and work with iHUS to come up with the plans was great. Any changes we had to the design they were really accommodating, and we ended up with a space that works around us and lets us do what we want.”

Siobhan says her Dad really enjoyed being able to choose all the fixtures and finishes; “Dad liked that he could choose everything. He said it’s the first property he’s ever been able to do exactly what he wanted from the start. From the colour of the flooring, the kitchen, the bathroom. Mum and Dad decided right at the start of the process what they wanted.”

The annexe has brought the family close together, something that Siobhan loves; “It’s been brilliant for us – Mother and Daughter living side by side! I can pop over when I get in from work and check they’ve been taking their pills as they are getting a bit forgetful now. And Mum comes over for breakfast most mornings – it gives us extra one to one time that we didn’t have before.”

Siobhan is also glad they decided to build the annexe now, whilst her parents are still relatively independent; “We thought it was a better idea to do this now rather than when my parents were in their 80s. They’re still young enough to enjoy the place and relax in their twighlight years here.”

Pauline agrees and is enjoying spending less time having to worry about housework or a large garden. Knowing her daughter is close by is reassuring too; “I think even if you’re not a close-knit family an annexe is still a good idea. You aren’t living in the same property so it’s easy to retain some of your privacy and independence. But you have the peace of mind that someone is there. That’s the fear when you get older – that there is nobody there. Living here I know I’ve got my daughter nearby.” 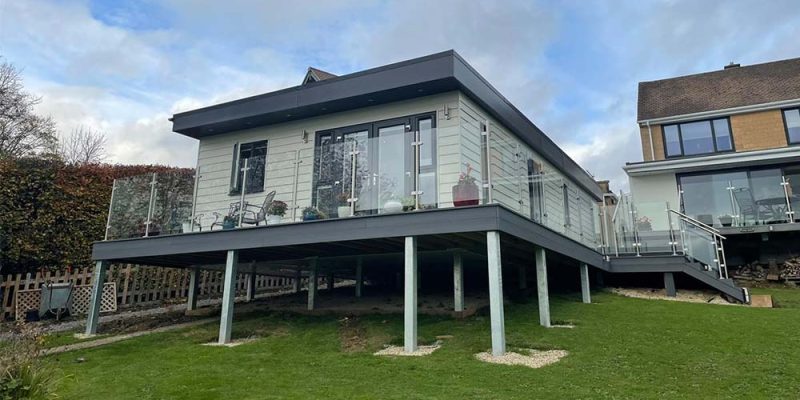 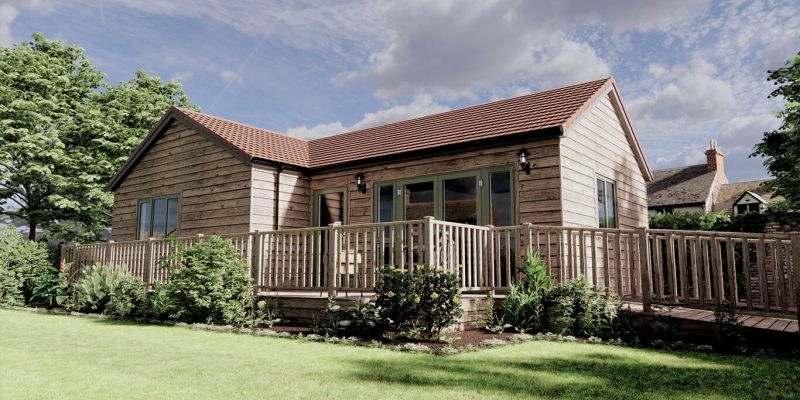 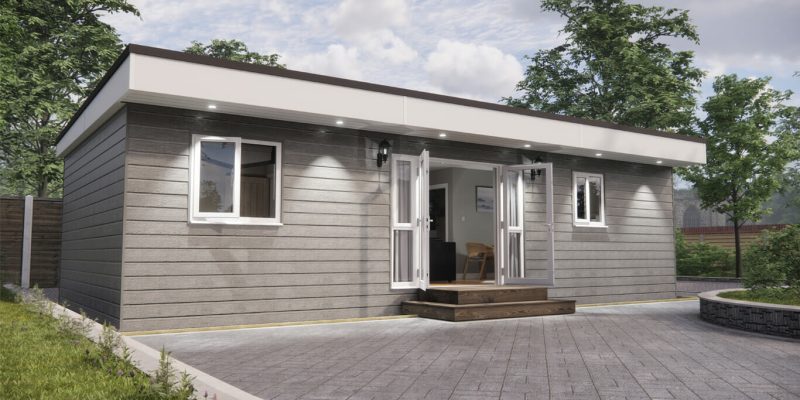 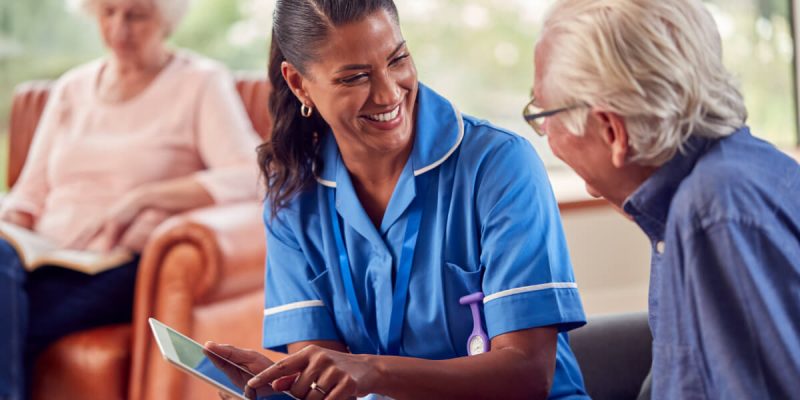 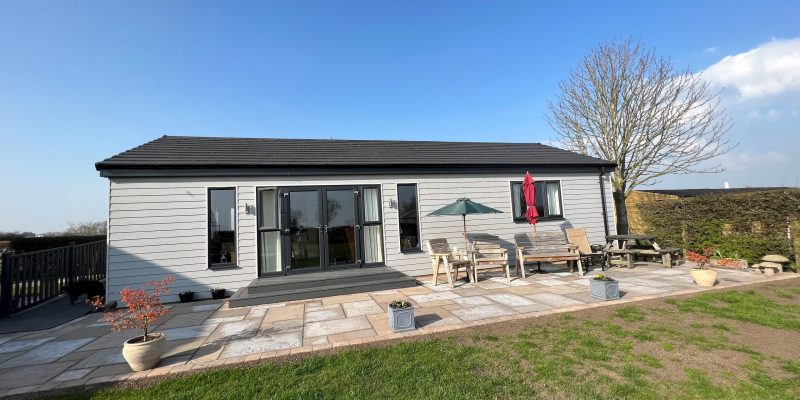 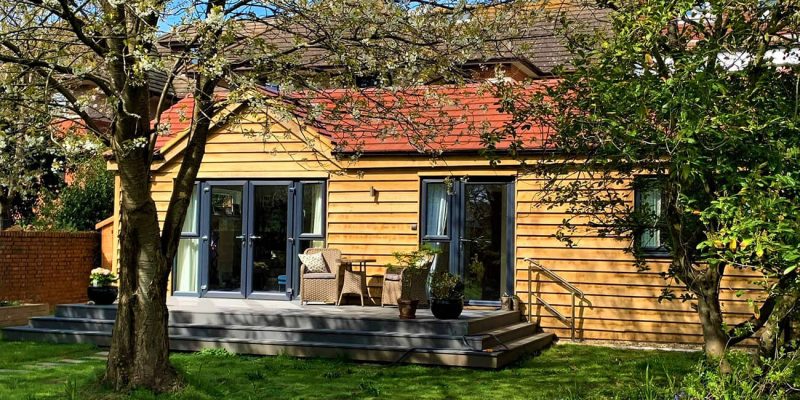